Heat transfer  is a thermal engineering discipline that concerns the generation, use, conversion, and exchange of heat and heat energy between physical systems. Heat transfer is classified into various mechanisms, such as thermal conduction, thermal convection, thermal radiation, and energy transfer through phase changes. Engineers also consider the mass transfer of different chemical species, whether cold or hot, to achieve heat transfer. While these mechanisms have different characteristics, they often occur simultaneously in the same system.

Heat conduction, also called diffusion, is the direct microscopic exchange of the kinetic energy of particles through the boundary between two systems. When an object is at a different temperature from another body or its surroundings, heat flows so that the body and the environment reach the same temperature, at which time they are in thermal equilibrium. Such heat transfer always occurs spontaneously from an area of ​​high temperature to another region of lower temperature, as explained by the second law of thermodynamics.
Law I of thermodynamics states that energy is eternal, cannot be created and cannot be destroyed. Energy can only change from one form to another. Based on this theory, you can change the heat energy to other forms as you like provided you fulfill the law of conservation of energy.
However, the reality is not the case. Energy cannot be changed as you wish. For example, you drop an iron ball from a certain height.
When an iron ball falls, its potential energy is transformed into kinetic energy  . When an iron ball hits the ground, most of its kinetic energy is transformed into thermal energy and a small portion is turned into sound energy.
Now, if you reverse the process, which is the iron ball you heat so it has heat energy equal to the heat energy when the iron ball hits the ground, is it possible that this energy will turn into kinetic energy, and then turn into potential energy so that the iron ball can rise?
This event is not possible even if your iron ball is heated until it melts. This shows that the  process of  changing the  form of energy above can only take place in one direction and cannot be reversed.
A process that cannot be reversed is called an irreversible process  . The process that can be reversed is called a reversible process. The events above inspired the formation of the second law of thermodynamics. Law II thermodynamics limits which energy changes can occur and which cannot occur.
This restriction can be expressed in various  ways , including, the second law of thermodynamics in the statement of heat flow: “Heat flows spontaneously from high temperature objects to low temperature objects and does not flow spontaneously in the opposite direction”; second law of thermodynamics in the statement about the heat engine: “
It is not possible to make a heat engine that  works  in a cycle that merely absorbs heat from a reservoir and converts it entirely into external effort “; the second law of thermodynamics in the entropy statement: “Total entropy of the universe does not change when a reversible process occurs and increases when an irreversible process occurs”.
Now from the basic law of thermodynamics above, on this occasion I want to share, how heat transfer takes place using a lubricant as a heat transfer oil.
while other heat transfer media (water) I  will  discuss   on another occasion.
This heat-conductive lubricant is usually applied to industries where in the production process heat is needed for the catalyst in making bonds between chemical elements in the process so that it can be bonded better and tightly or perfectly
What are the basic criteria that a Heat Transfer Oil must have?
Things that must be considered in a heating system that uses a heat transfer oil:
Example image: Heat exchanger system using a heat transfer oil as a heat carrier
Heat Transfer Oil, as a heat exchanger, is considered by some to be a better alternative to overcoming the problem of water quality and the limited temperature of the system owned by the water system. besides that there are several other advantages as seen in the following table 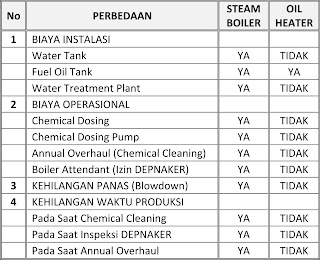 The advantages of using heat transfer oil compared to other systems, can generally be seen as follows: