Steam boiler on the ships

Steam boiler is a closed vessel that can form steam with a pressure greater than 1 atmosphere, by heating the boiler water in it with hot gases from burning fuel.
Steam Power Plant : D nature of installations tanaga steam, absolutely must be equipped with the Boilers and there should be the aircraft that use steam. On ships using fresh water must be saved, the used steam from the steam planes must be attempted to be condensed again in the condenser so that the condensate water can be used again in the boiler. 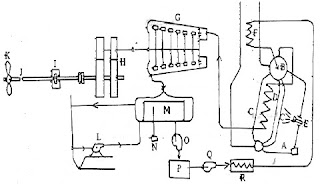 A steam boiler must meet the following requirements :
1. In a certain time must be able to produce steam with a certain weight and pressure greater than 1 atmosphere. 2. The resulting steam must be with a water content as little as possible 3. If further heating is used, then in irregular use of steam, the temperature of the steam should not change much and must be easily regulated 4. At the time of motion where the use of steam changes -rubah then takanan steam should not change much 5 .Uap should be formed with the amount of fuel as low as possible 6 .Susunan pengopakan fuel must be such that the fuel can be burned by not requiring the cost and effort is too great.
✔️Combustion Engineering CEV (Combustion Engineering V-seri) CELTG(Combustion Engineering Law Temp Gas) CELTGR(Comb Eng Law Temp Gas Reheat) Kawasaki Superheat Content Kawasaki Full Cooled Kawasaki Enclosed Membrant.